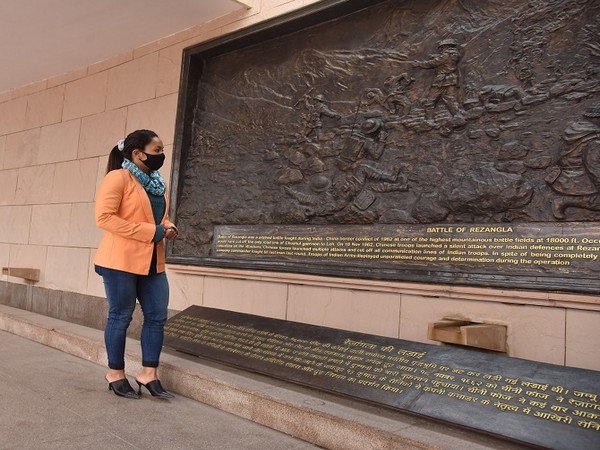 . Speaking about her visit to the 40 acre open landscaped memorial, Mirabai said, “My stays in Delhi have usually been for tournaments but this time I kept this visit on my itinerary as this place bestows the essence of pride, not only for the armed forces but for every Indian.” Depicting the glorious war history of India since 1947, the memorial is a gestation on the idea of rebirth of those unsung heroes through their stories, journey and struggles translated as spatial expressions.

Walking through the semi-open corridor and gallery holding the brave stories of significant historic battles in Indian history of the Army, Navy and Air force, the Olympic Medallist said, “I am mesmerized with how the concept of building this memorial is inspired by the historic ‘Chakravyuh’ formation and the walls decorated with bronze murals depicting the battle scenes fought by the son of our soils.” “After coming here, I deeply feel that every Indian should visit this place at least once in their life,” added Chanu. According to the SAI, the Indian Weightlifter also paid tribute to “martyr” Major Laishram Jyotin Singh who is awarded the highest peacetime gallantry award Ashok Chakra and hailed from her native state Manipur.

You all have made India proud: Tendulkar congratulates Satwiksairaj, Chirag Shetty and Lakshya Sen

‘Make most of it’: Irfan Pathan on Deepak Hooda’s ODI call-up

NZ vs Ind: Great to get four wins against quality side, says Amelia Kerr

There were no differences between Virat Kohli, Anil Kumble: Vinod Rai

Kashi is imperishable; it witnessed destruction by Aurangzeb, valour of leaders like Shivaji: PM Modi