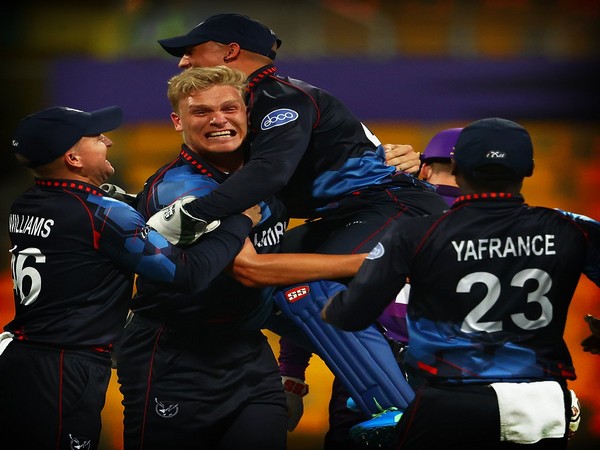 Abu Dhabi [UAE], October 28 (caru news): Namibia has the self-belief to stun their Group 2 rivals and qualify for the semi-finals of the ICC Men’s T20 World Cup, according to batter JJ Smit.

Smit’s unbeaten 32 from 23 balls saw his side home in their Super 12s opener against Scotland, with the 25-year-old blasting the winning runs from the first ball of the final over. For all Smit’s heroics with the bat, he was understandably keen to hand the plaudits to Player of the Match Ruben Trumpelmann following his remarkable opening over which reduced Scotland to two for three. And with a win under their belts, the batter is confident there will be plenty more to come from his side in the coming weeks.

If we qualify for the semi-finals of the World Cup, there will be massive uproar in the cricket world. We know we can, it’s possible, we are in the Super 12s and we are all enjoying it. We all believe,” said Smit in an official ICC release. ” That was something special from Ruben to take three wickets in the first over. We had them on the back foot from the start – we can’t ask for more and we’ll enjoy that. We are so thankful for all the support in the stands and back home. It means the world to us and my phone doesn’t stop with messages – I don’t want to be in Ruben’s shoes tonight,” he added.

Afghanistan are next up for the jubilant Eagles on Sunday and having witnessed their fine bowling display against Scotland, which saw spinners Rashid Khan and Mujeeb Ur Rahman share nine wickets between them, Smit is braced for a tough test. “For the next game, it’s about playing their spin well – and their seamers,” he said. “We shouldn’t just focus on their spinners. ” They have three of the best spinners in the world but their seamers are always highly ranked and come with a bit of pace,” he added.

The story of Raid , Bribery and Grilling.

Regret timing of directive of taking the knee, but pleased with de Kock’s decision to come around: CSA

90 Minutes with Merck Foundation CEO, Launched as New Reporting and Engagement Tool for Their Programs